“A hungry man is not a free man” ~Adelai Stevenson, former U.S. Ambassador to the UN.

Twenty million hungry stomachs in America a decade ago wasn’t cool. Do you know what’s even less cool? Forty million hungry in the US today — and more than two billion food insecure worldwide. Worst of all, food insecurity has actually soared in the US, increasing faster than rest of the developed world. The plain fact is that the need for food assistance is higher now than ever before — with food stamp use in the U.S. doubling in the past decade — soaring about 60 percent in the past three years alone. (I shall let the figure describe the rather grim state.) 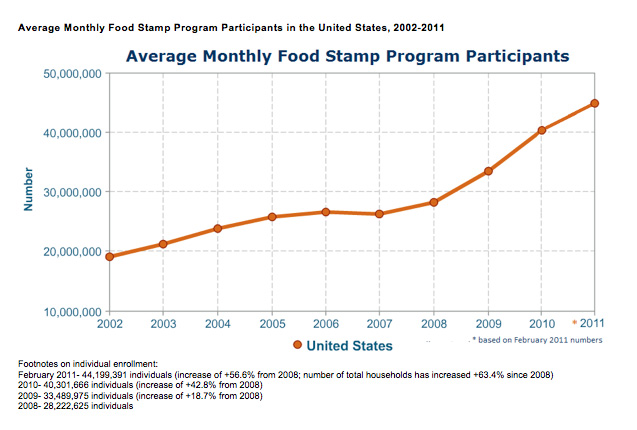 Growing up in Nebraska, I once knew a child who not only wore mostly clothes donated from charities, and ate free school lunches (well at first, he took ‘five-finger-discounts’ in lunch lines until the school caught up and enrolled him in the federal school lunch program), but more profoundly — his family’s dinner very often relied on the luck of a next door restaurant every night after closing time — and the chance of collecting any leftover pizzas being discarded for the trash. It left an indelible memory.

Why do I bring up this story? First, because this Saturday, May 14 is the annual Stamp Out Hunger food drive, the large annual food collection led by postal workers around the country. As an aside — Campbell’s Soup, a co-sponsor, is also pitching in up to one million pounds of food for every person who supports Stamp Out Hunger on Facebook Causes. Do some good while you’re browsing Facebook for once.

However, as important as these necessary food drives are — are they keeping pace with actual need for food assistance? During the recent economic downturn , Stamp Out Hunger’s national food drive collected 75-77 million pounds of food per year — however donations have been relatively flat, reporting only one percent and five percent increase in donations between 2008-2009 and 2009-2010. This has obviously not kept pace with need — as the federal Supplemental Nutrition Assistance Program (SNAP — a.k.a. food stamps) average monthly enrollment has dramatically increased from 28.2 million individuals in 2008 to 33.5 million in 2009 (an 18.7 percent increase) to 40.3 million in 2010 (a 42.8 percent increase). In addition, the number of households using food pantries also rose by 44 percent from 3.9 to 5.6 million households during roughly that same period. Moreover, among married-couple families, food pantry assistance rose even more by 66 percent. Indeed, half of all USDA food stamps programs benefited households with children. Overall, these SNAP numbers are surpassing all expectations. The latest February 2011 month data showed SNAP enrollment topping 44.2 million individuals, a 57 percent increase above 2008 (and a 63.4 percent increase by number of households). All in all, percentage of Americans that are food insecure on food stamps is higher today than ever before.

As hunger and food insecurity rise, unfortunately so do the costs — more than $68.3 billion for SNAP per year, with a total of $94.4 billion for all USDA food assistance programs in 2010 (we are expected to top $100 billion by 2012). Republicans last month had threatened to cut $127 billion from SNAP (almost 20 percent) over 10 years. Conservatives sometimes suggest that the monthly average $300 per person food stamps are another form of unnecessary entitlement spending, suggesting food stamps are akin to ‘wasteful’ unemployment and welfare benefits. To such claims, they are dead wrong. In fact, the majority of beneficiaries are employed working Americans, and a full 85 percent of households with food-insecure children had a working adult. More importantly, food assistance is more than a mere hand-out — more than giving someone a fish. There are two main reasons hunger person is more than another stomach to feed, as fighting hunger more than merely giving a man a fish, but rather an investment in our future.

First, just as we all value safety and homeland security, a society with food security is just as important. Hunger is a primal instinct that drives a fundamental human need, which if unsatisfied, bodes major implications on civil unrest. From legendary Roman conquests over the Nile for Egyptian grain, to legendary tales like Les Misérables, to 19th century wars with Native American tribes, to modern day food riots in Egypt, Indonesia, Peru, and Haiti, and to rise of crime in many urban communities — food insecurity has been an underlying cause of many strife and unrest. However, important as that may purpose may be, citing food security as a means of ensuring societal security is still insufficient in itself. Although important, such purpose is somewhat rudimentary and akin to Roman emperors appeasing the masses with bread and circuses. The rationale of satiating the hungry to avoid civil unrest, like all measures to protect interests of ‘national security’, is merely a stop-gap measure — albeit important in preventing the bottom from falling of out of our society.

Second and more importantly, public food assistance programs to ensure food security is more than a ‘hand-down,’ but rather a critical ‘hand-up’ in upward mobility — a hand-up to better nutrition and greater societal economic benefits. Notably, children eating nutritious breakfasts in the morning has been shown to have improved cognitive function and exhibit better school performance. The potential societal and economic implications should be obvious to everyone. Moreover, studies have shown that individuals with limited economic means have poorer diets, typically with greater caloric density and lower nutritious value. Why is this important as an upward hand-up? Consider the case of a 60-year-old man who dies of heart disease. While an ER doctor says he died of a heart attack, and his primary care physician says he died from not taking medication for his high cholesterol and diabetes — an epidemiologist and nutritionist would say his heart attack was actually caused by his underlying poor diet, as he lacked the economic flexibility to choose healthier foods. (Indeed, studies have shown that 82 percent of heart disease and 91 percent of diabetes may be underlying caused by poor diet and lifestyle.) Obviously, the preventable disease burden on society and associated costs would be enormous — estimated to be in the hundred of billions in attributable (and preventable!) healthcare costs. If only our policy makers had that foresight when proposing 20 percent cuts to food assistance programs. Further continuing the case: due to the father being unable to afford healthier and more nutritious meals, his daughter may also not do well in school, not because of her innate intelligence, but rather from cognitive underdevelopment from poor nourishment. This then further feeds into a continued vicious life cycle for her and her later children.

Granted, current food assistance programs are not perfect and could be improved to enhance food choice for more nutritious products. And progressive pilot proposals should indeed be considered, such as Michael Bloomberg’s proposal to exclude unhealthy sugar-sweetened beverages from food stamp redemption, or USDA’s pilot programs to incentivize food stamp use at healthier vendors. But more fundamentally important is the need for current programs to continue to prevent the rock bottom food-insecure individuals from falling out of society, from falling out of our society’s future. This is the most critical.

Overall, we all need to improve our understanding about hunger — what are its implications, how to best improve food security via macro-level policies, how to improve poor diets via better programs, how to improve nutrition outreach to the most vulnerable, how to improve dietary guidelines, and how to avert economic burdens of disease and cognitive impairment — for society today and for our posterity. Hunger is more than merely giving a fish to satisfy an empty stomach — preventing hunger is critical to our society’s future. It is investing in our society by providing a fishing rod to better nutrition, to better development, to better future. After all, even to bootstrap out of poverty, one first needs a shoelace–a lifeline like food assistance programs.

Finally, returning to that earlier child who subsisted off of discarded pizzeria leftovers and federally subsidized school meals: such federal school meal programs offered him a priceless hand-up that left a legacy on his future — he ultimately grew up and became a nutritionist. Reflecting back, those federal school lunch and breakfast made me realize just how vital food programs had been … to my life. Those indelible memories of hunger during my childhood are with me to this day — and I shudder to think what our society would look like without these critical life-saving food assistance programs that help one in seven Americans survive, so they may one day thrive.

Please remember to support Stamp Out Hunger this Saturday. Thank you.

Eric Ding is a nutritionist and medical researcher at Harvard University, and founder of the Campaign for Cancer Prevention.